In the midst of throwing pots (boy do I owe ya'll a pottery post!), sorting unmovable-by-movers stuff, weaving commissions, driving back and forth to Fredericksburg and the general stress of limbo I decided a break was in order! Pat from the Fredericksburg Spinning and Weaving Guild arranged for members to visit Misty Mountain and Solitude Wool.  Since I am crazy for Solitude Wool's Karakul wool and had limited time I opted for a quick trip to Solitude.

I love what they do.  Suzanne raises Karakul sheep at her farm Red Gate Farm, shops for other local breed fleece and is the washer of fleece and the dyer.....Gretchen raises Romney at Solitude and weaves and seems to be the master of their internet presence (though that is my own observation.....)  Together they are Solitude Wool.  While they each have their own farms, they have finally found a warehouse location between their locations to centralize all their woolly products.  It's an amazing space. 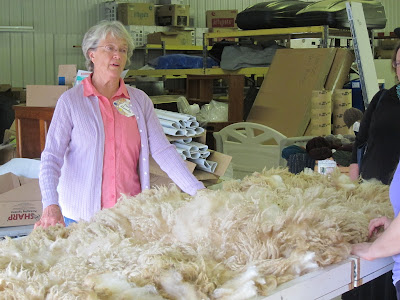 Sue discussing "skirting".  When you lay out a fleece and sort out the short cuts and unusable wool. 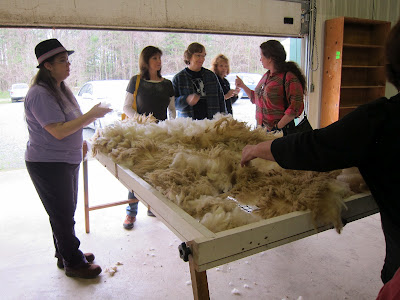 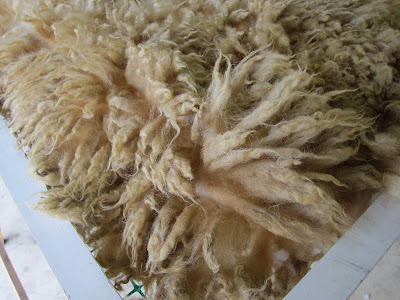 The Tunis (the type of sheep grazing at Mount Vernon during George Washington's life time) fleece on the skirting table. 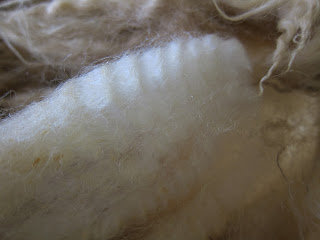 Just LOOK at that crimp!  This is what handspinners are looking for. 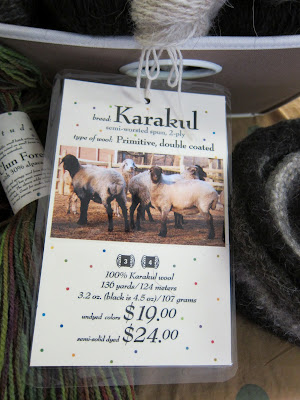 Sue and Gretchen sell mostly breed specific yarns and rovings.  Each is well labeled with a picture of the sheep..... 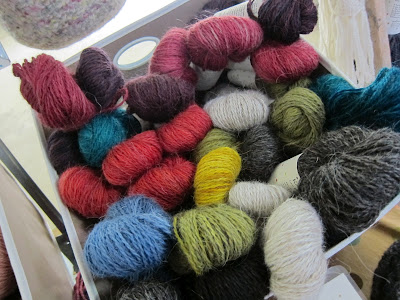 This basket of Karakul was somewhat depleted after my visit..... 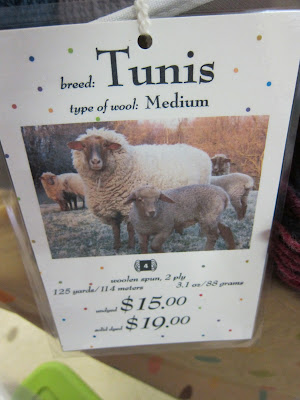 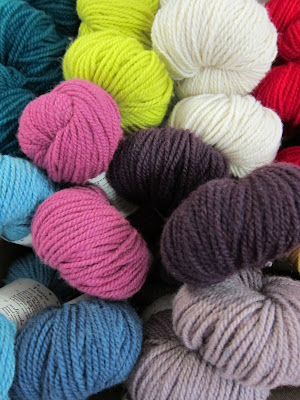 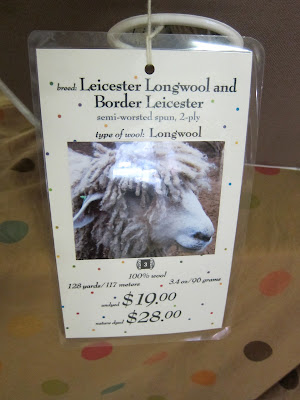 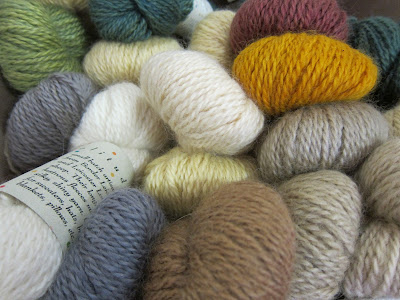 Solitude Wool's product is available on their website.  But if you are lucky enough to live in the DC area they are regulars at the DC Farmers Market!
Posted by Anna M. Branner at 10:57 PM 6 comments:

Ron Philbeck and Michael Kline and Trista Chapman, OH MY!

Last Wednesday was a date I had saved on my calendar for several weeks. DRIVE TO FREDERICKSBURG. (I am still going back and forth until the house changes hands officially.) Wednesday was the workshop with the boys from North Carolina, Michael Kline and Ron Philbeck. In addition, Trista Chapman of Fredericksburg was signed up to join them in the giving of deco secrets!
Liberty Town was VERY lucky to have a bit of time with Michael and Ron as they were heading to Cape Cod to teach a weekend long workshop. While we only had them for a quick evening of pizza, beer, comedy and decoration tips it was a night that I am so happy to have been in attendance!!
It was a fantastic sampling of their work.  And I just have to say that Ron you are so funny!  Just what I imagined while reading your blog. 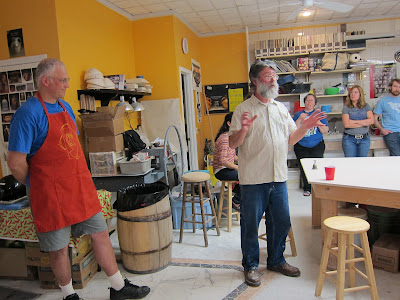 Dan doing the official introductions (with Michael Kline waiting in the wings)
Ron Philbeck works with earthenware clay fired at low temperature in an electric kiln.  He applies white slip and utilizes sgraffito to decorate his pots. 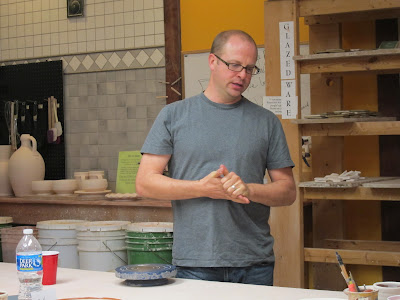 Ron warming up the crowd. 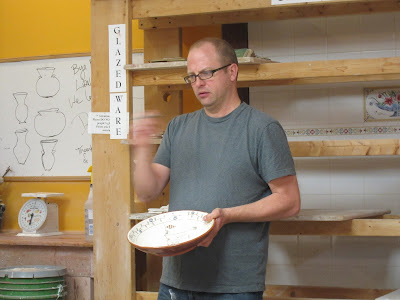 Explaining his sgraffito techniques.  (That's a laundry line bowl in his hand...one of his older but very popular designs)
Trista Chapman is another potter who works with low fire clay, this time white clay, and fires her brightly colored pots in an electric kiln. 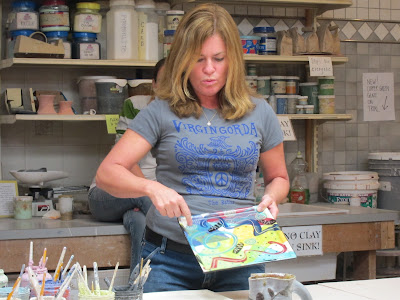 Trista showing a finished plate with her color technique. 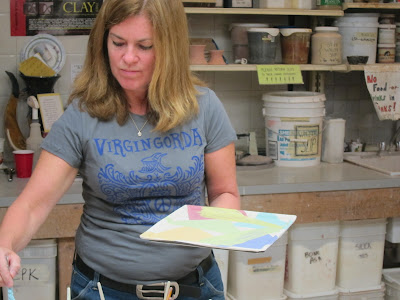 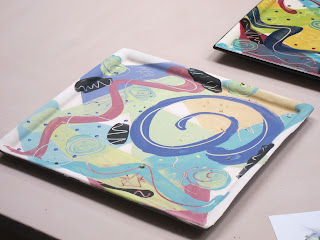 Finished plate.  I found it interesting that she does all her decorating at the bisqued stage, not as greenware.  Definitely gives her a big window for decorating. 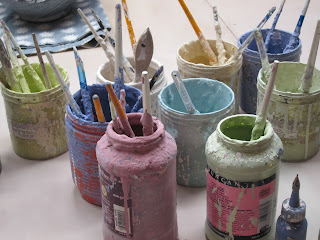 I had to document Trista's, er, messy, glaze jars.  If you are using them every day why waste all that underglaze by washing out your brushes??? 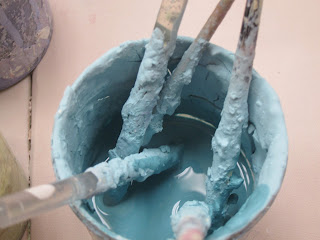 Michael Kline wood fires.  A very different and time intensive technique.  He uses wax to resist a slip.  Then fires in a high fire salt atmosphere in his wood kiln to produce his beautiful pieces. 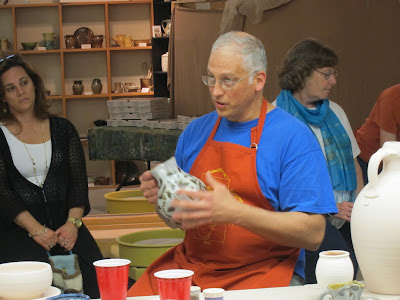 Michael introduces us to his style of decorating with wax resist either on its own (that allows warm browns after woodfiring) or colored with oxides and colorants to darken the design. 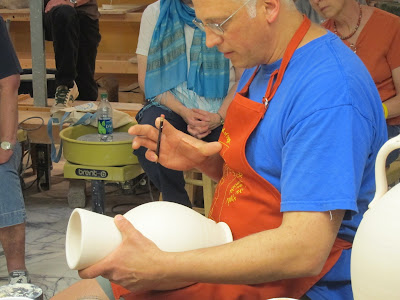 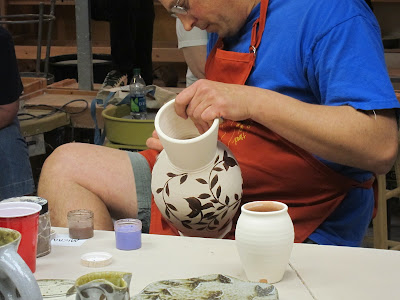 The purple jar holds straight wax colored with food coloring to help him see his design as he applies the wax to the pot.
The brown jar is the colored wax that you see him painting on the pot.  He strives to make literally every stroke just right! 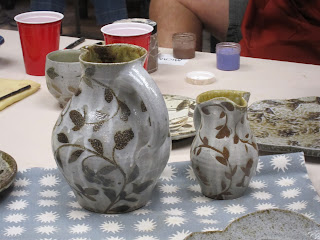 Examples.  That little one on the right went home with me! 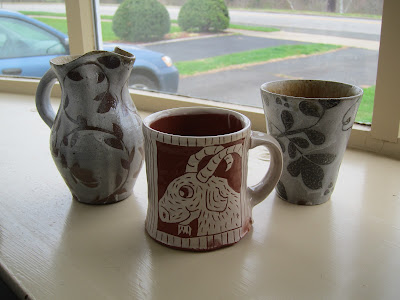 Can't attend a workshop without taking home a souvenir....I have a couple of Ron's pots from his etsy shop, so I bought only this wonderful goat mug.....
The pitcher on the left is the wee one from the previous picture and is deco'd using the plain wax.  The cup to the right uses the colored wax and the vines show much blacker.
I own a pot or two of Trista's as well.  Since she is local I know I will make my way to her shop again soon!!!
Posted by Anna M. Branner at 9:01 PM 6 comments:

So OUR HOUSE IS UNDER CONTRACT.  I am so relieved.  That means, not only do we have a buyer....I no longer have to make the bed, vacuum every day and keep the kitchen counters clean and clear!  Keep your collective fingers crossed that things continue to proceed....

Meanwhile I have been weaving on my throw project when visiting in Fredericksburg....Cutting a project off the loom is rather dramatic....so I saved the actual event for March First Friday.  My small studio was FULL and I heard a satisfying gasp as I cut the threads to release my throw! 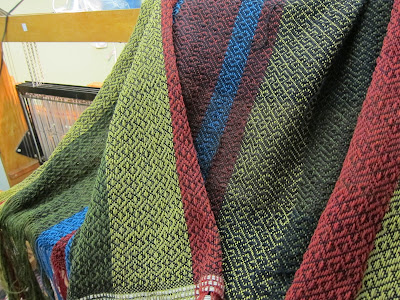 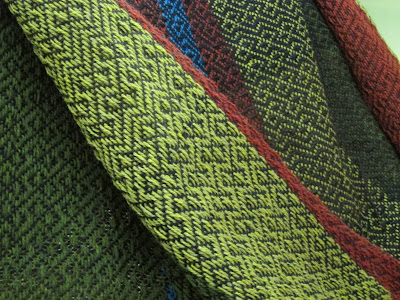 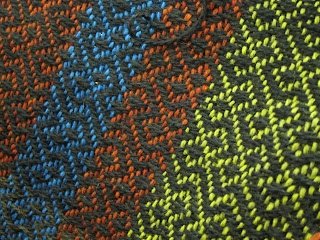 I am working on "twisting the fringe"  (I'll get pictures of that for you.) Next I will felt it.  I haven't ever felted something this large and now that most washers no longer have an agitator I'll need to do some thinking whether I will felt it in the washer or do it the old fashioned way manually.  Though I would have to borrow a couple of horses to drag it behind if I were to do it the way the Mongolians did!
I also have a kiln full of greenware to fire tomorrow.  Slowly building inventory to pack up to move....just in case the next studio is slow in appearing.....
Posted by Anna M. Branner at 10:03 PM 13 comments:

(FANTASTIC NEWS!  The kickstarter campaign was FULLY FUNDED in only 5 days!!  A real testament to Susan Gibbs since everyone who knows her knows any project she starts will be QUALITY.  Don't hesitate to donate still if you are just reading this.  Extra money will go towards more video tutorials, PDFs and increased content!  SO proud of everyone that made this happen so fast!)


I often assume that most of my readers are artists.  Even if you don't call yourself one, I'll bet you do make things.  Whether you are a gardener (painting with flowers), a cook (designing with flavors), a stay at home mom (creating a home) or a potter or a painter or a writer or a knitter or a weaver or.....we are ALL artists, creative beings.  Our hands are our tools.  Which brings me to By Hand.

By Hand is the newest and best to date project created by my artist/shepherd friend Susan Gibbs of Juniper Moon Farm fame.  By Hand is a magazine devoted to all that is hand made!


By Hand will be a lifestyle magazine for people who make, with departments for cooking, crafting, DIY, gardening, and do-gooding, with a bit of travel and profiles of makers every month.

The idea is to celebrate creating things with our hands, and to explore the motivation to make things in a world where there are cheaper and immediate alternatives. It will be both practical (patterns, DIY projects, etc) and thoughtful, with a lovely and gentle aesthetic.


This magazine is designed to be a gorgeously produced, photographed and written piece of art.  Something to be savored and saved . Susie has started a kickstarter campaign to get her and her staff started on this awesome venture.  Won't you hop on over to Kickstarter and support her???
Posted by Anna M. Branner at 10:52 AM 5 comments: